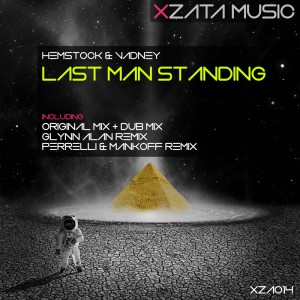 Les Hemstock has been involved in the entertainment industry his entire life. He built his reputation as one of the UK's leading producers and live performance DJs leading to his eventual worldwide hit records as 'Jive Bunny and The Mastermixers' and 'Hemstock & Jennings'. The successful collaboration with music Composer/Producer Chris Jennings culminated in further Top 20 International hits including 'Nothing But You' which featured singer and TV star Kym Marsh with a remix by world famous DJ Paul Van Dyk from Germany who signed the song as a collaborative effort for his new album.

They are back now with another stunning trance production: 'Last Man Standing'! 'LMS' gets the energy flowing right from the start with its percussions and electro synths.
Massive chord progression, deep strings and screaming lead synths are building up to a climax, ready to hit the dance floors.
Not just a single release; this package includes a Dub mix, a Glynn Alan remix and a Perrelli & Mankoff remix!
Both Glynn Alan's & Perrelli & Mankoff remixes are typical uplifting Trance remixes, making it an even more powerful and exciting release!

Available on all your favorite stores now: